Well Folks.  It’s no big secret that Bob Wright had a very big influence in my career as a sports fishing guide and even bigger part in helping me getting Hook’n Them Up Fishing Charters started. Mike Marriott from longbeach charters gave my first real taste of being a west coast guide he brought me on as a junior guide after Bob had sent me to run the Wick Restaurant on long beach.  I first met Bob at Painters Lodge.  I was there dining room chef.  Bob and his staff showed me what it was like to be involved with the sports fishing industry in which I fell in love with very quickly and 6yrs later I was siting in Bob Wright’s office at the Oak Bay Marina telling him I was going into business for myself.  I will truly miss  our conversations and time we spent talking about fishing and the way things use to be back in the day ole boy.  Now who am I going to call uncle Bob. :(  I never got to say thank you one last time as everyone knows I am expanding the business and moving further up island to start my own fishing lodge with my soon to be wife Danielle Gould and our two children .  It pains me that you won’t get to see the finished result from all your tutelage.  Rest in Peace Bob I will miss you.   Tight lines and Tips up cause there’s a Fish on with your name on it Bob up there in the big blue sea of heaven.  Cheers Capt. Steve

Bob Wright, founder and head of the Oak Bay Marine Group and philanthropist, has died at age 82.

Wright, who suffered from heart problems in the past, went into Royal Jubilee Hospital Wednesday and passed away shortly after 6 p.m. His wife, Yun Kloihofer was with him.

He was working at his Oak Bay Marina office on Beach Drive until a few days ago, arriving at 10 a.m. and staying at his desk until 6 p.m., said Susan Barcham, company director of business administration.

After nearly dying because of heart issues in the early 2000s, Wright dubbed himself the “Teflon man,” she said.

Barcham said that Wright’s passion for his company means, “He would want this to be business as usual … We are meant to carry on and make sure that our guests who are booked for the season have the same wonderful experience they have always had.”

The Oak Bay Marine Group has 300 year-round employees, with numbers climbing to 900 during peak season. Wright’s beloved Cape Santa Maria Beach Resort in the Bahamas, where he loved spending time, has about 50 more staff, she said.

Company holdings include the Painter’s Lodge in Campbell River, April Point Resort and Spa and the April Point Marina on Quadra Island, and the Canadian Princess Resort at Ucluelet, the Oak Bay Marina on Beach Drive, Pedder Bay RV Resort and Marina in Metchosin, the North Saanich Marina, and Ladysmith Marina.

A plan is in place for the company to continue, Barcham said. “There are trustees in place who will be figuring out the new structure and making sure that people are doing what they have to do to make it business as usual.”

Barcham, who started working as Wright’s executive assistant, said, “His door was always open and he loved entrepreneurs and he mentored entrepreneurs.”

She wished he had written a book about his life. Barcham said that she and friend Janet Baird would urge him to do so. “He never really recognized that he was such a unique west coast story.”

Wright used to have performing killer whales at his marina, garnering controversy as society changed its views about whether these animals should be in captivity. Barcham remembered when he sent the last whale to another aquarium, moving it on a busy election night to avoid attention.

Businessman and former Victoria mayor Peter Pollen went fishing for the first time with Wright, up to the Queen Charlottes. “He did a great service in the industry and in the province and was a good fellow,” Pollen said. Wright was an “entrepreneur of incredible vision and imagination.”

Personal trainer Rick Fayad knew Wright for 25 years. “I trained him off and on for years and we became friends.” The two would walk along the Oak Bay waterfront from Wright’s nearby waterfront Beach Drive house to Wright’s Oak Bay Marina where they would have coffee.

Fayad said Wright was a “stubborn, tough guy and he made it to a ripe old age.”

In the early 2000s, Wright cut back on his working hours – to about 45 a week from 70 – after nearly dying because of heart problems.

Steve Sinclair, manager of Northern operations and for its Vancouver South Terminal operations for the Oak Bay Marine Group, said from Campbell River, “I think basically everybody is in shock today.”

In 2007, Wright, who called himself a “gumboot fisherman” donated $11 million to UVic to create the Bob Wright Centre – Ocean, Earth and Atmospheric Sciences.

He said at the time that he wanted to know more about climate change. “It was the right thing to do because where I made the millions was in from the ocean, so why not give it back?”

Regina-born Wright carved a business empire out of the sports fishing business, setting up resorts lodges along B.C.’s coast. Over the years, he did battle many times with the federal Department and Fisheries and Oceans over how to manage salmon fisheries.

He also served as a member of Victoria city council.

Wright was raised in Edmonton, starting in newspapers in 1946 at 16 years old. He moved to Victoria at age 18 to work for the Victoria Times.

He was a strong-minded, colourful individual with a larger than life personality. Wright was a dedicated businessman, joking for many years that he would try to cut down on his workload and habit of carrying three briefcases to his office.

Wright was married two times previously and had three children.

We will have more about Bob Wright Friday in the Times Colonist newspaper and at timescolonist.com 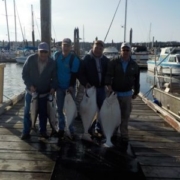