Offshore fishing for Albacore Tuna is a total blast and one of the newest fan favorites to hit the North West  BC coast.  Having 20 plus years of guided sportfishing and commercial fishing experience on our coast Capt. and Master

Guide Steven Cahill has been catching Tuna off the west coast of Ucluelet & off the North West Coast of Vancouver Island since 2004.  His former employer and mentor Mike Marroitt has given him the keys to success to this Wicked Tuna fishery.  Steven had taken a small break from this fishery as he became a new father in 2013 and has now outfitted his offshore vessel back into battle command mode for these fantastic longfin fish. The Tuna fishery has caught the interest of many anglers up and down the coast each time we have helped them land an Albacore Tuna, this fishery has taken off and has serious anglers dreaming about heading offshore in search of a ”Tuna” or two as it screams off some line on your reel.  The fishing community has a saying the drug is the tug.  Well, wait until you see an Albacore peel off the reel baby.

Albacore Tuna are a highly migratory species. Albie’s spawn in tropical waters and travel north with warm water currents, feeding off the coast of Canada and the US in the late summer before heading south again. The schools arrive off Quatsino sound in late August and stay until late September where they are accessible during good weather conditions. You need to look for that hard edge folks.   Albacore in Canadian waters are often between 10 and 35 pounds. But we have seen some gross over 100lbs.  We personally have not landed a Tuna that big yet.  Albacore Tuna are known to run in large schools, some several kilometres wide.  We combine our Tuna trips with fishing for Coho salmon, and mixed bag bottom fishing for Halibut, Lingcod, and Snapper.   We can also fly fish for some of these species as well during that time.  These packages are based out of Quatsino Sound and have been a favourite among our repeat clientele.  Accommodations and processing are still provided with these trips but due to the lack of facilities in Quatsino Sound, they will be from our home base.  We will transport you there at no extra cost to you to our offshore vessel where we still offer our same great service with a brand new twist.

Note: Tuna fishing is for the seasoned angler who is not prone to seasickness. These trips are weather dependent and are a great option on a multi-day package there will be an added $450 minimum surcharge to your trip rate due to distance and fuel costs. All add-on will be discussed prior to billing. 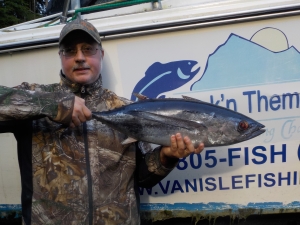